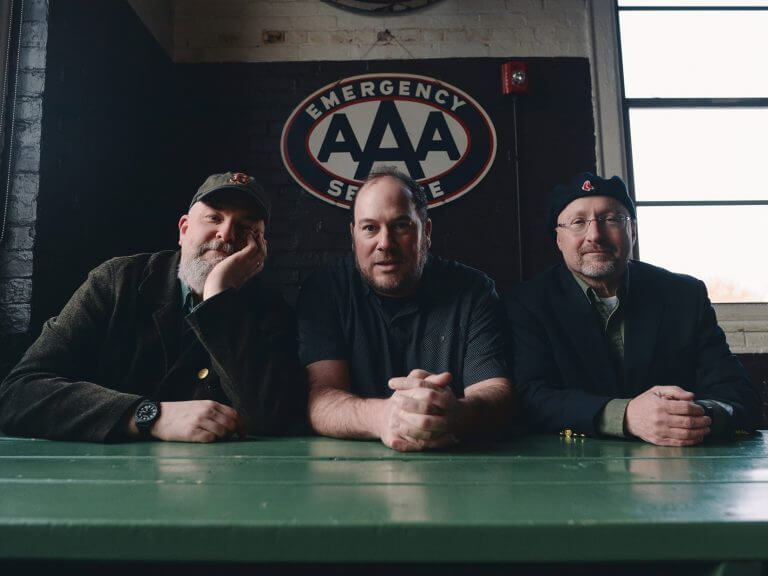 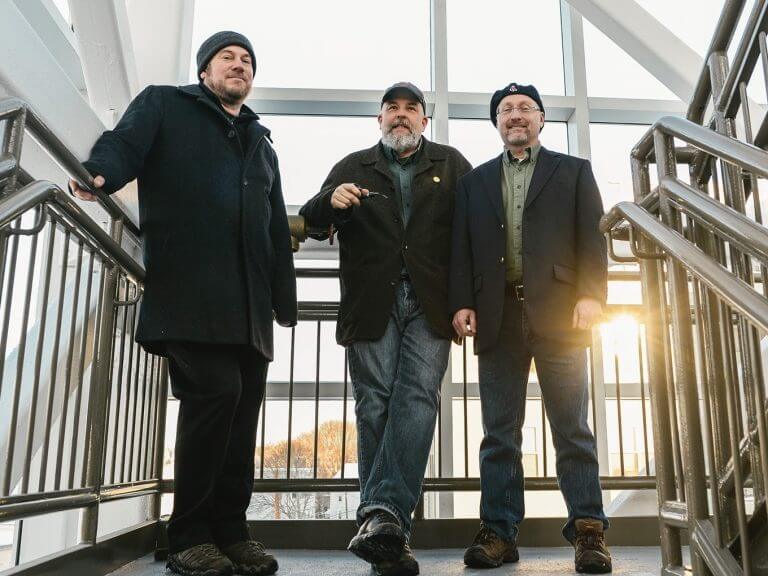 The Half Moon Jug Band is a three-man musical mob of desperadoes hijacking the plodding freight train of folk music, steaming it up the mountains of rock ‘n roll, through the vaudeville pass, and down across the valley of country music before wrecking it in the middle of a rubber chicken farm on the outskirts of town. Their weapons of choice: guitars, banjos, mandolins, hefty bass riffs and rotund sing-along choruses. But they’re no bluegrass band; they also wield mighty kazoos, trumpets, harmonicas and thumping drums.
Jug band music is homemade music. You won’t hear it on the radio, you won’t see it on MTV and you can’t get it at Wal-Mart. It’s a creamy, sonically concocted casserole of American music. You’re not sure exactly what’s in there, but boy it sure tastes good. Musical labels are useless. If it sounds good, if the audience claps, if it feels honest, then it’s jug band music.
The band thrives on interaction with their audiences. For the HMJB it’s not just about standing on stage playing songs. It’s about singing, dancing and making people happy. They do whatever it takes to put on a show for all ages, studding every performance with jokes, stories and mandatory sing-alongs. No one gets out without singing. No one.
The Half Moon Jug Band started as a merry band of sidewalk subversives entertaining passersby and annoying shopkeepers on Exchange Street in Portland, Maine more than ten years ago. Now they can now be found on the road playing concerts and festivals all over the northeast like New Year’s Portland, the Maine Festival, the Old Port Festival, the Prescott Park Folk Festival, the Oddfellow Theatre, the Winthrop Performing Arts Center, the Maine Lobster Festival, Burlington’s strange 3rd of July Fireworks extravaganza, the Fryeburg, Deerfield and Cornish Fairs, and many town concerts too numerous to enumerate here.
The HMJB has made many live appearances on television and radio including WCSH’s 207, WGME’s Daybreak, WMPG’s Local Motives and WCTN’s Shine.
In 2009 the band released its fourth full-length CD, “Get the Show on the Road,” following 2005′s “Jug Band Army,” 2003′s “Christmas On Exchange Street” and 2001′s “Space Man in a Jug Band.”
Website: http://www.halfmoonjugband.com/